Tribute to Elsa the Lioness
Elsa grew in many people a 'seed' of love and understanding
.... A strong desire to help and to speak in behalf of the animals,
for they cannot speak for themselves 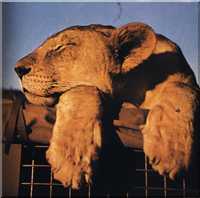 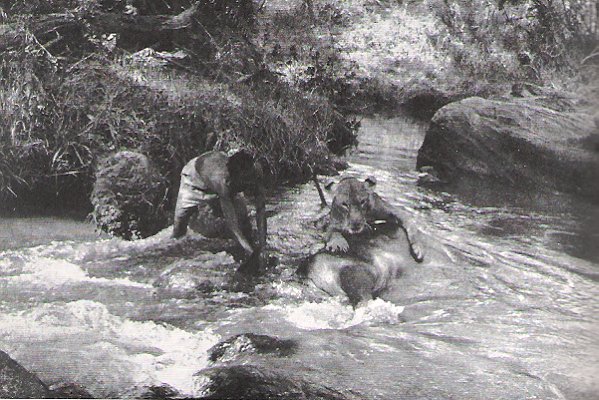 Elsa immediately after making her own kill allows
a human to not only approach but to handle her kill!
....an astonishing tribute no less to her intelligence than to her self-control. 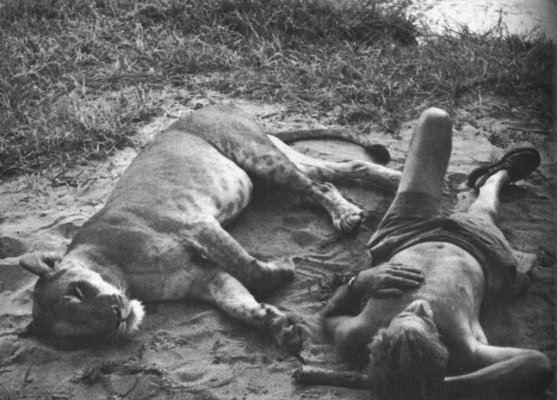 TRUST and Friendship .... Elsa and George Resting Together

Elsa and the Adamsons showed us what man could do with Love
even when dealing with what some would call, ferocious wild animals.
And the lions showed us they are not just eating machines as portrayed
in most tv nature programs, but individuals with a wide range of qualities,
capable of varied emotions, deep trust and lasting friendship. 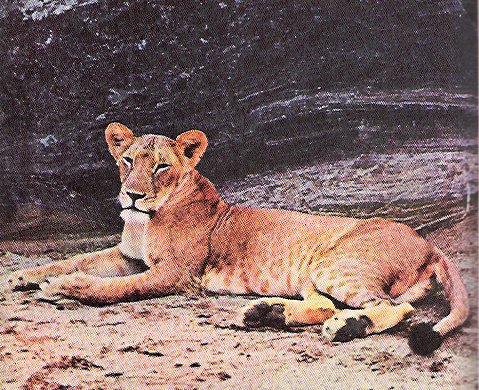 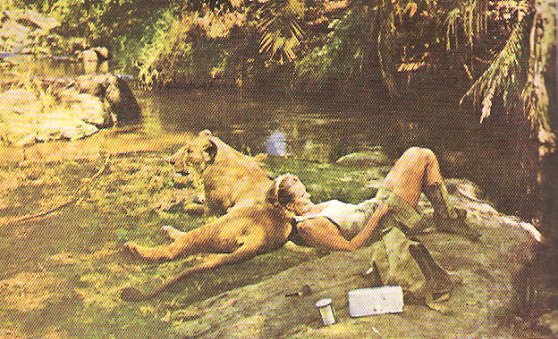 Elsa letting Joy use her for a pillow! 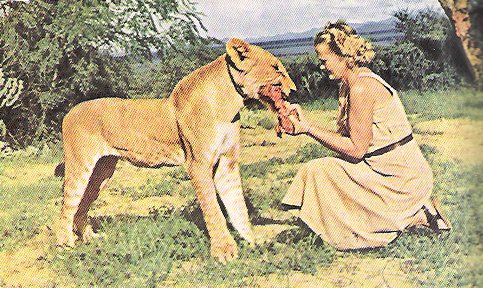 Joy holding some meat while Elsa chews on it. 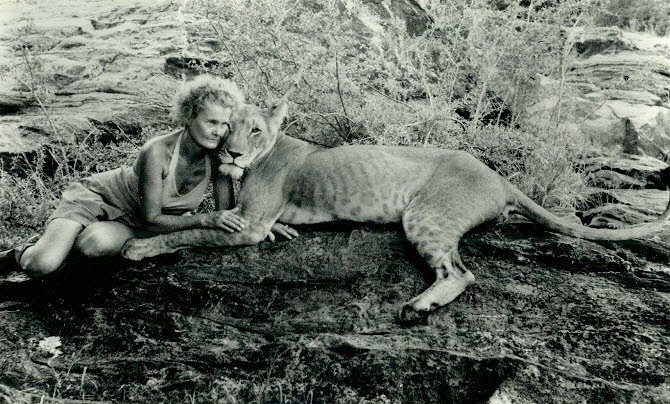 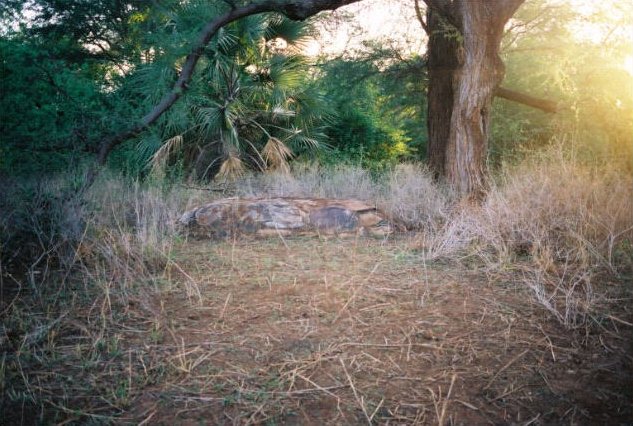 Elsa's grave in Meru
Elsa died with her head in George's lap.  He wrote of his great sadness and pain in her passing.
After George buried her, George and his scouts fired 20 volleys of shots over her grave
in the hopes that her mate may have heard them and paused.
Elsa died from a tick born disease called Babesia.  She was only 5 years old.
Photo taken November 2004 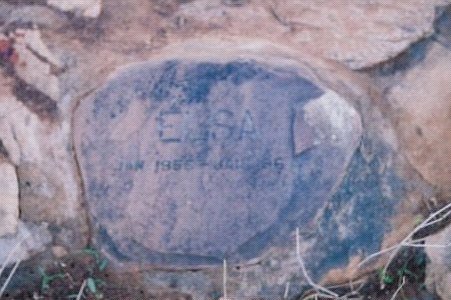 Elsa is buried in Meru National Park in Kenya, East Africa.
Many visitors to Meru visit her grave to pay their respects.

Elsamere Estates.... Photos of House and Grounds
(Former home of Joy Adamson located on the banks of LakeNaivasha.)

The photos shown above on this page of Elsa's final resting place were provided by Susan L. Wood.
She had this to write about her visit to pay her respects to Elsa: 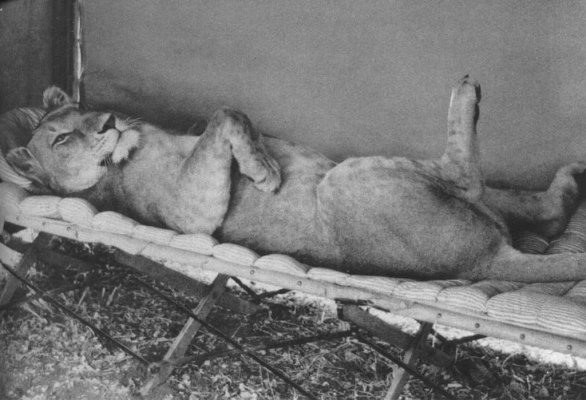 Animals canNOT speak for or help themselves,
they need YOU to be their voice and to support those
organizations which speak in their behalf.
In Nairobi Park humans have visciously murdered most of the Lions in the
park, sometimes cutting off body parts and mutilating their bodies.   Because of
human encroachment and humans cutting off the route out of the park which prey
animals need to graze and survive,  the prey animals were starving to death and when
very few prey animals remained, some starving Lions attempted to survive by feeding
on livestock belonging to humans. This gave humans an excuse to murder any and
all lions. At one point there were only about seven lions left in the park
and the remaining lions are in grave danger of being murdered. A fence around
the park was considered.  Whenever animals and humans have conflict,
humans are ALWAYS the victor and often the animals suffer and die.
Someone must speak for the animals who are voiceless .... 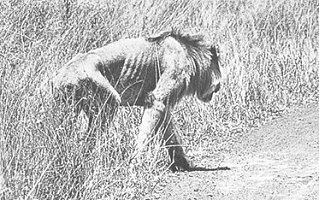 Animal welfare groups work hard to help animals
but they rely on our financial support.  They need those of us
that care about the suffering of animals to
HELP them to HELP the animals.
In Memory of Elsa and all the wonderful lions, you can
SAVE a Lion's Life .... SUPPORT organizations
that help animals (See Links page.)
AND SUPPORT legislation that helps big cats!

Support Animal Organizations
so that they may Help Save the Animals!

Tribute to Elsa the Lioness
2011 Documentary.... Available on DCD and BLURAY 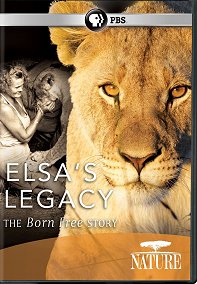 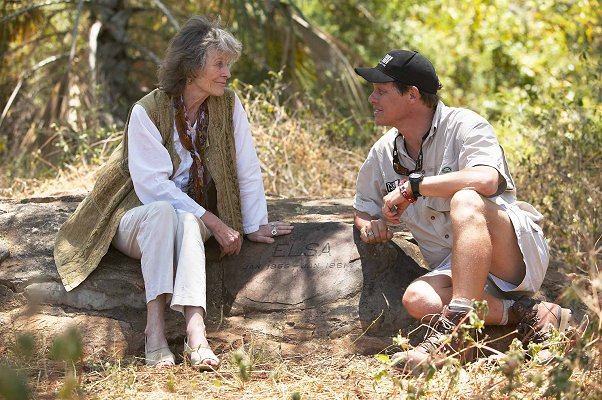 Virginia McKenna(Played the part of Joy Adamson in the movie Born Free)
with one of her sons visiting the grave of Elsa the Lioness.
Elsa is buried in Meru National Park in Kenya, East Africa.
Many visitors to Meru visit her grave to pay their respects.
Photo taken by MDaines in March 2005, Courtesy of Virginia McKenna. 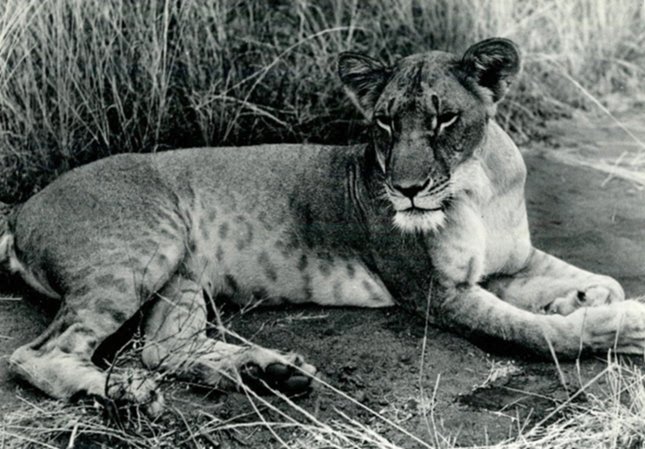